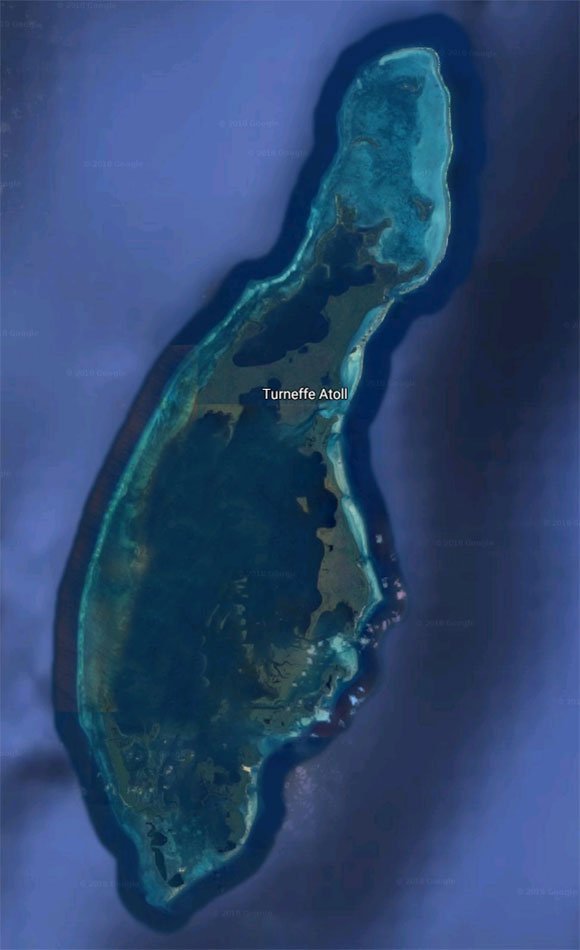 The Turneffe Atoll in Belize has been recognized for more than forty years (1970s) as one of the Caribbean’s top destinations for bonefish, tarpon, and permits. World-class saltwater anglers extol the adventure of stalking the difficult-to-achieve, prestigious, “Grand Slam” that is, catching a bonefish, permit, and tarpon all in one day.

This atoll is a popular destination for scuba divers, who can explore the waters to see tropical fish, shipwrecks, and coral formations.

The atoll is a chain of small Caribbean cayes (islands) due southeast of Caye Caulker and Ambergris Caye, 20 miles (32 km) off the coast of Belize City, Central America. At 30 miles (48 km) long and 10 miles (16 km) wide, this is the largest true atoll in Belize and the Mesoamerican Reef System. The Turneffe Atoll was declared a national marine reserve by the government of Belize on 22 November 2012.

More than 150 mangrove islands and cayes with savanna and littoral forest cover make up Turneffe. Threatened and commercially critical marine species make their home at Turneffe Atoll. This environmentally diverse land is made up of an elaborate network of saltwater flats, creeks, and lagoons. Vast expanses of seagrass and mangrove shallows and habitat provide an essential nursery for fish species, lobster, conch, crocodiles, and invertebrates.

The seagrass sites were very alike in terms of biomass; this is despite the difference in location within the atoll (windward and leeward). The distribution of biomass across the different sections of the plant differs, however. In the results obtained for Calabash Caye site, the biomass ratio of above-ground: below ground appears to indicate that the site is not a healthy one.

This may be a result of poor water quality and can affect stability during storms and asexual reproduction (MBRS 2006). It is important to note that this result is based on one monitoring session and thus further regular monitoring is recommended to support or confirm this assessment.

Coral reefs support two major industries in Belize: tourism and fisheries. Reefs also provide shoreline protection that is crucial for the development and settlement along the coast. In 2008, the World Resource Institute estimated that the economic contribution of the reef to Belize is between USD 268 and 370 million dollars (WRI 2008). Turneffe Atoll represents 15% of Belize’s coral reefs, (Meerman, 2005) and like the Caribbean and Mesoamerican region, over the past decades, it has experienced numerous impacts both natural and anthropogenic, such as storms, coral bleaching, ship groundings, and coastal development.

In general, the reefs at the atoll were identified as being in poor health. The major contributing factors were lowered abundance of herbivores (urchins and fish) and poor coral cover. Healthy Reefs 2010 reported a fleshy macroalgae cover of 17.3% for 2009. The 2012 MBRS assessment shows a macroalgae cover of 16.5%. This cover of macroalgae may not yet reflect the large absence of herbivores, which were reported to be twice as abundant in 2009 with mean biomass of 1144 g/100m2 (Healthy Reefs 2013).